skip to main | skip to sidebar

I'm pretty sure summer happened on Thursday, about 6:45pm

Yeah, so, it's the last day of August and it's grey and yicky out. Apparently, the UK just had the coldest summer in 18 years, after the warmest spring since the dawn of time. I read a Guardian article recently that said that people would take a lot more notice of climate change if it were called "global weirding" rather than "global warming", people would take a lot more notice. Unless Jesus got involved, in which case the conversation would drop to the intellectual level of puppies, but that's another story.

Much hand wringing has occurred since the riots. There are still some windows boarded up here and there, and the occasional burned out building, but does it really feel like anything profound has changed? No, not really. For about a week there was a lot more police presence (though it never felt overbearing, as I imagine it would in the USA), and we saw things like Welsh police around here "Heddlu", I think they are called. They throw sheep at you if you misbehave or something.

Robin just walked up and said he would like me to say that he just got invited to an "exclusive" sex club. I've never gotten invited to an exclusive sex club. I'm terribly jealous now and hope that he gets crabs. Big hairy ones.

So yeah, police - I suppose there are some more of them about, but it really does almost feel like nothing happened, which, in a way, kind of reinforces the general feeling that the riots, while they may have, at their origin, been about something, were really, mostly, just about getting stuff. Not much different than mugging at the street corner really. An opportunity was had. Interestingly, Hackney made a real effort to clean things up, very quickly. Walworth Road, down closer to where we live, not so much. Still lots of boarded up windows. There was one area, outside of London, where the riots were described as causing "£10 million in improvements". Kind of amusing. One other things that I found interesting, and that was actually reported fairly well, is that while the initial impression of rioters, in London, was that they were predominantly black, this changed as they moved outside, as they moved north. The northern riots were mostly white, which is, not so surprisingly, very much a reflection of the ethnic makeup of the lower classes in these areas.

Right - so, tomorrow I have an interview for the business analyst position, which would initially be for six months. Truth be told, I'm not all that hugely thrilled about the whole thing, mostly because I really couldn't give a rat crap about business processes or project management, but it would pay a lot more and would give me more time to look for something I really wanted. What I really want is to climb volcanoes or model climate or do something that involves science, and not bureaucracy and people and local governmental bullshit, but I think I kind of missed that bus.

Funny enough, I finally, after all these years, came up with a degree idea that actually has to do with geography and local governmental bullshit - did I mention this before? Can't remember and I'm too lazy to check. Anyway, it has occurred to me that it would be really interesting to look at how the overly bureaucratic and now-focussed culture of local government is reflected in the built environment in this country (as local government is, generally speaking, responsible for planning decisions). I ran this idea past work, as they do sometimes pay for degrees and as I think it is kind of theoretically important and unexplored, and as if to prove my point, they said no, because they don't see any way it can directly relate to my job. Yeah. I need out of local government, but I'm just not sure how. That is the current plan. Somehow.

Oh, funny story - I went to a friend's moving-out party the other night. I show up in shorts and t-shirt on my bike, and discover that the part is very "A-Gay" (fashionable and pretty). So - already feeling a little bit like a dork. Then this white cat wanders into the flat. My friend had never seen the cat before, and, this being a room full of gay men, no one seemed to know what to do with this wandering pussy. So, being the hero, I walked over to the cat, bent over and scooped it up. Surprisingly, the cat was fine about being picked up. My shorts, however, were not. The button, which was on its last legs anyway, gave up, popped off, and flew across the room, and my shorts nearly ended up around my ankles. Yeah - definitely looking really cool. Fortunately, my shorts, being A&F, had an internal draw-string. Still though, if the ground could have opened up and swallowed me...

House - the house is looking even more houselike. We're finally replacing the god-awful bare bulbs the previous owners left hanging from the ceiling. We got a dining table and some really cool green chairs. And the back yard actually looks not bad. We had a bbq on Sunday - big success - first time we trashed the kitchen! Yay! 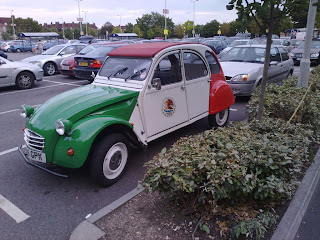 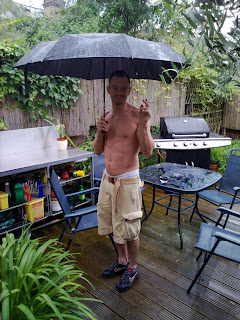 Robin smoking a ciggie in the rain. How butch. 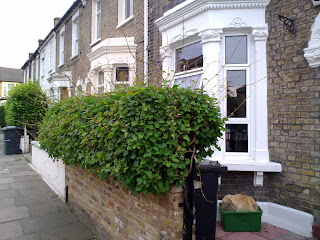 Our front hedge reminds me of "The Thing", with its little whip tendrils all over... 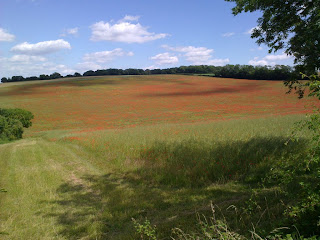 A field of poppies. 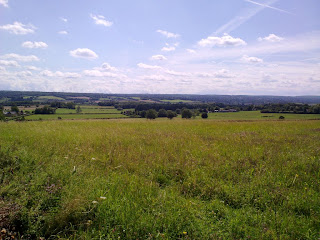 View from the North Downs. 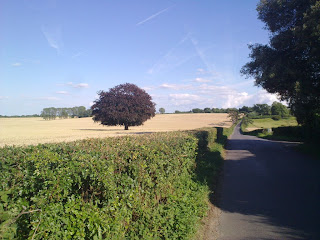 It's a purple tree! 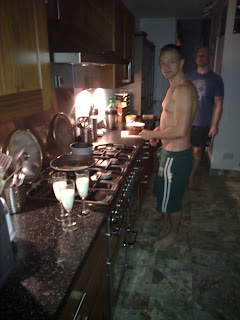 My bday - milk in champagne flutes. How fabulous! (And yes, Robin does actually occasionally wear a shirt...) 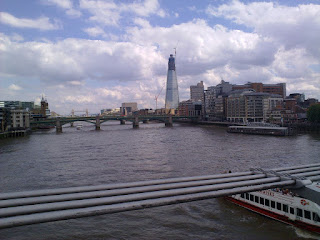 The Shard - ever higher, ever uglier! 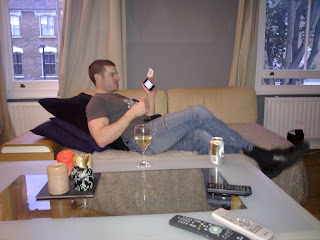 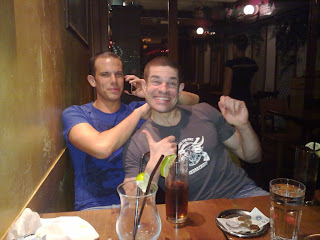 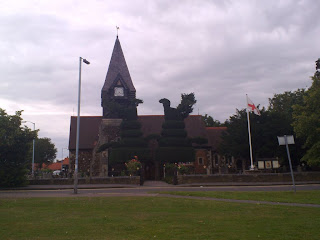 Yeah, that's not tacky at all! 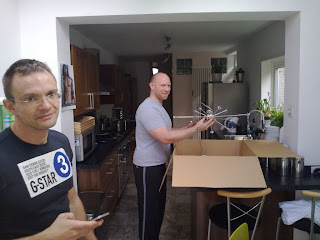 David launches Sputnik in the kitchen... 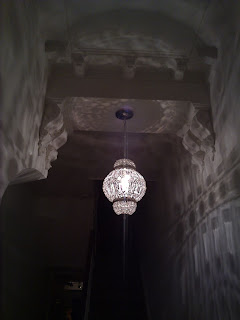 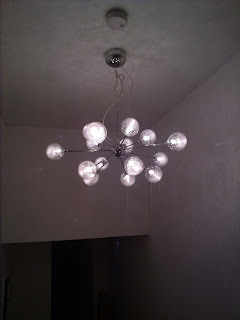 Sputnik again, or the stair light. 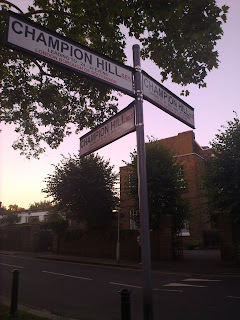 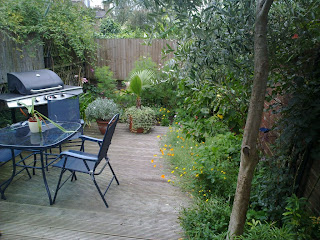 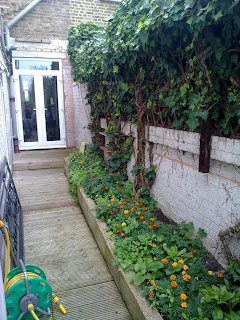 Marigolds in place of ivy... 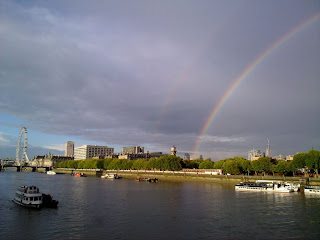 Rainbow on Thames
Posted by dougzilla at 20:17 2 comments:

Oh what a mess. We are witnessing the underclass rebellion, and what do they want? Hoodies and big screen TVs! Things seem a bit quieter in London tonight - possibly because there are 16000 police on the streets (instead of 6000 last night), as well as groups of vigilantes, just waiting for a fight. Funny thing is, in central London, you could be almost forgiven for thinking that there was nothing going on. There are still mobs of tourists roving about, the shows are still on, nothing seems amiss. Not so true if you head out of the center just a bit. The list of areas hit in London reads pretty much like a list of London's black neighborhoods. We were evacuated from work yesterday at about 430 because hooded youth (mostly black) had already started throwing bricks at the already assembled riot cops (mostly white). The official story is that it all started with a stop and search, when the kid refused, but that's bullshit. Stores were closing up at lunchtime because everyone knew something was going to kick off, and there were already riot cops in front of Town Hall. All the little shits needed was an excuse to start throwing things. And they threw, and they looted, and they burned. I didn't go into work today, and those that did were told to leave about 12, because more trouble was expected. To Hackney's credit though, there was an army of people out this morning with brooms - mostly, and I hate to point this out, white. Anyway, there have been riots all over the city, the nearest about a mile from where we live. There were about 30 youths chased into the local train station last night, and a group of hooded, gloved (black) young men congregating outside our house late last night, off to, I would imagine, not a piano recital. It's really been quite terrifying, and we all made sure to be home and inside tonight before dark. They looted the main shopping street heading north from here last night, and there were several huge fires started overnight around the city. Most of the violence has been against businesses, but there have been a number of houses broken into, diners in restaurants attacked, cyclists attacked, pretty much anyone in the wrong area at the wrong time attacked. Tonight the worst of it seems to have shifted out of London - kind of expected, since all the cops in the country are here. Interestingly, in London, for the most part, they targeted the shopping streets in shitty areas (because they were nearby and convenient, I suppose). Tonight, in the other cities, they are targeting the city center shopping areas, with all the big department stores. The police have said they may start using rubber bullets (which they have never done in England, though it is a regular occurrence in Northern Ireland). They have, at the moment, ruled out water cannons, tear gas or the army, but those are all under discussion. What I find really shocking about this is not so much that it has happened - the UK has a mean underclass, many of whom have never worked, and families who have been on welfare for generations. What is shocking to me is how sudden and widespread it has become - but then, I suppose that is part of the power of social media. They were just waiting for an excuse, and the police shooting in Tottenham was what they wanted. I wonder why it was that one, rather than any one of a number of other police fuckups? I really wonder what is going to be the outcome of this? I suppose the US has been having all the flashmobs lately, and Paris had huge riots a number of years ago. This country doesn't have a curfew, but that is one of the options they are discussing at the moment. I do think it's going to lead to some pretty overly agressive policing in the future (Northern Ireland?), as well as really piss poor race relations for a while, and I think it's going to finally end Britain's experiment in multiculturalism (which has been fizzling lately anyway). Unlike the US or Europe or pretty much anywhere else, the UK, I suppose because it is divided up into various little internal countries that dislike each other, has never been really big on pushing what it is to be British - insisting instead on a multicultural mosaic where everything is as good as everything else. The result of that is that it's a tiny little crowded country with many groups of people that have absolutely dipshit to do with each other, and no overriding sense of cohesiveness. That and the fact that you could get lifetime welfare and a place to live simply by being able to breathe independently and pop out babies has left the country with a pretty astounding number of people who do absolutely nothing except hang out. Hackney is one of the worst places for that - I think something like 30% of the housing is owned by the council, and it ain't nice. Anyway, the vast majority of London remains here and in one piece, but OMG I've never experienced anything like what's been going on here the last few days! Our cleaner (yes, we have a cleaner), who is from Albania, said the last time she saw anything like this was in 1997 in Albania, and Der Spiegel just ran an article comparing London with Mogadishu. Fab.
Posted by dougzilla at 21:30 2 comments: